After having had Ubuntu 12.04 installed for months, I finally moved my old Fedora services over to it, including Postfix. Here’s how I configured it.

I configured /etc/aliases so that local email destined for ‘root’ (including regularly scheduled system cron jobs) is delivered to my local account, instead of being sent to root@comcast.net (they don’t appreciate getting my SPAM):

I added the following to /etc/postfix/main.cf. Notice that I appended a “.NOT” to the relayhost. I did this initially so that I could send test email messages, and make sure message delivery was correct, before allowing email to go to my ISP. More on this later.

I added the following to /etc/postfix/sasl\_passwd:

I added the following to /etc/postfix/sender\_canonical:

I ran the following commands:

Next, I tested my email configuration by sending test email messages (using ‘mutt’ or ‘mail’)…

Then I configured and ran ‘fetchmail’ briefly (hitting CTRL-C after a few were downloaded), and made sure messages were delivered to my local account properly. I’ve been pleased using Ubuntu with postfix, fetchmail and procmail and archivemail. I often log in remotely using SSH and use mutt to read my email. I also use Google Mail. I’ve set up rules to forward some email to my ISP account, which get downloaded using fetchmal via cron job.

Why do I bother saving my email to my local machine? I like redundancy and backups, I like the speed of using a command line email reader, and I have ten years of email archived on my local machine. It’s been very useful to be able to search through that email for old software license keys, website passwords, email addresses and such.

In July, my oldest son and I went backpacking into the Uintahs for three days, thanks to the “can-do” attitude from my father-in-law. It’s been twenty two years since I’ve been to the Uintahs, and I was nervous about my ability to hike nine miles, as well as for my nine-year old. We went on practice hikes to prepare. My old external frame backpack was still in mostly working condition, except that the mesh backing had become loose. Apparently, not even nylon lasts that long when “tight”. So I bought a used internal frame backpack and used it instead.

From everything I read, good quality socks were the most important part of backpacking comfort, so we bought morino wool socks. They kept our feet dry, comfortable and blister free. It took us nine hours to hike the beautiful trail, and it felt so good to make it to camp and to eat dinner.

We packed as light as we could, and instead of a camera, I brought my iPod. This was one of the times I wished I had a smartphone with more pixel density. I put it in a ziplock back to protect it from the elements, or from a leaky water container. 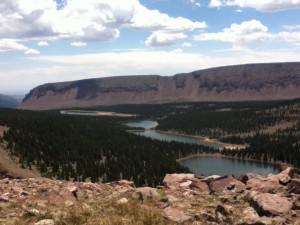 The second day, we did a day trip of eleven miles, attempting to reach the top of Mount Emmons at 13,440 feet. We climbed up the boulders of the mountain, and walked across the crest of the mountain. It was also a giant boulder field, above the timber line, and it’s amazing that anything grows there in such a harsh climate. Giant spiders were plentiful, and their webs were impressively strong. We avoided them when we could, and broke others, sending their inhabitants scurrying. The ground cover was a hardy, crunchy variety. The yellow flowers gave it a rugged beauty. We occasionally heard the bark of a dog from one of the lakes far below.
We reached about 13,000 feet and spotted a white, hairy mountain goat. My energenic brother-in-law, Dan, went ahead of us. We were out of breath in the thin air and stopped frequently. We communicated with Dan via radio. We ran out of time to make it to the top, unless we wanted to hike back in the dark or spend the night on the mountain, so we turned back. Dan passed us on the return trip, and we saw his head bobbing up and down on the boulders a mile or more ahead of us. Later, we noticed that we got sunburned more quickly than at lower altitudes.

At one point, Dan picked up a stack of layered sandstone rocks and carried them so as to slow himself down.

The last mile before we got back to camp, I felt like I could lay down in one of the few flat places, in the dirt, and go to sleep. We kept going and made it back to camp. We boiled water with my 20-year-old MSR whisperlite stove, and my in-laws boiled their water with a new alcohol stove. My son and I enjoyed rehydrated chicken and potatoes for dinner.

Amusingly, as tired as I was, I couldn’t sleep until nearly 3 A.M. because my Walrus backpacking tent was too hot. So I read from the scriptures on my iPod, and typed out some of our experiences on the iPod touch-screen keyboard while laying in my tent.

During our hike back to the trail head on the third day, we passed a forest ranger riding a horse, as well as an entire family riding their horses for a day trip. I was a bit jealous, since my back was in pain. For the last two miles, I carried my son’s pack in my arms, which counter balanced me so that there was no back pain. We were also able to keep up a quicker pace that way. Reaching the trail head felt great. Taking a shower forty five minutes later felt even better.

Our next adventure is to hike Mount Timpanogos.